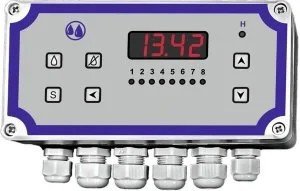 The UMS-T controller must have working temperature sensor connected. Otherwise, the controller can not be switched on or settings can not be made. The lack of a sensor is signaled by displaying the Err symbol.

The heater control function is implemented via relay 8. It can not be used in this controller for other purposes, unless it is not used to control the heaters at all (despite having the UMS-T version).